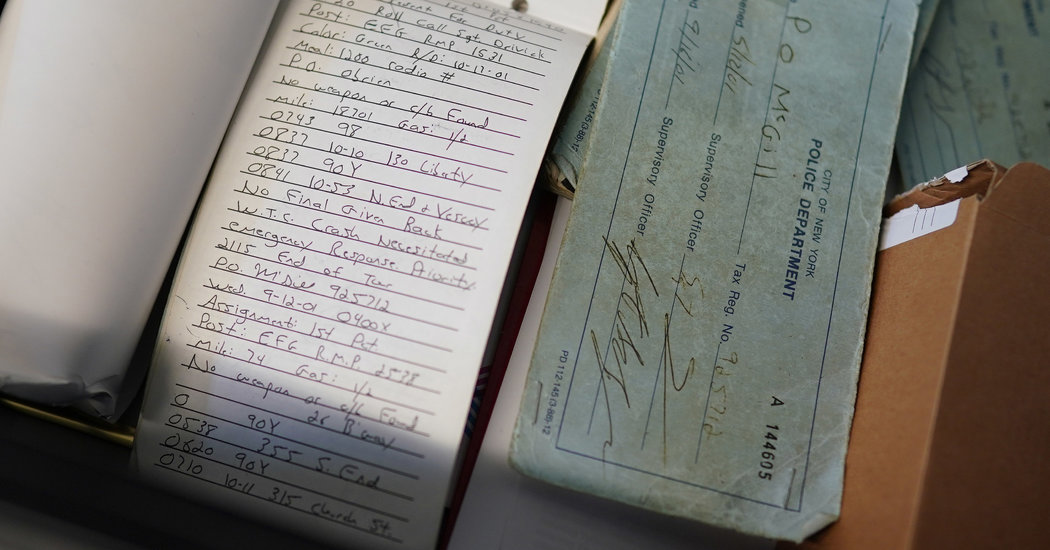 For more than a century, the New York City Police Department has required its officers to keep a detailed, handwritten memo book while on patrol.

Officer Cruz’s locker at the station house holds dozens of completed memo books chronicling his 23 years in the department, with details about big arrests, countless 911 calls and even what time he took lunch.

The memo book may be the department’s oldest policing tool, one that has appeared in countless movies and television shows and become as much of a staple as the gun, handcuffs or the nightstick.

But they are about to become a thing of the past.

The department is retiring handwritten memo books by Feb. 17 in a transition to a digital version — an app on officers’ department-issued iPhones. Instead of making entries by hand, whether with flowery script from ink-dipped pens in Victorian-era New York or ballpoints today, officers will type in their notes, which the app will send to a department database.

The transition represents a major shift in the way the department regards this daily record keeping by more than 30,000 of its uniformed members, and it will vastly revamp how the department can access memo book information.

In addition to the books’ historical importance, entries can become important legal documents. Department officials say the transition will help eliminate possible abuses, such as faking entries, and having to sort through indecipherable handwriting.

After arrests, officers have long turned over relevant entries — on crime scenes and on statements made by suspects or witnesses, for example — to prosecutors, and were expected to bring their books to court if they were called to testify.

The memo books largely stayed with the officers, who were required to safeguard them even after retirement, since the books could be subpoenaed as evidence in future criminal, civil and departmental trials.

But now the department, not the officer, will keep that information. Officers and department officials may search entries — those made since the transition, anyway — by date or keyword, instead of rummaging for old memo books stored in lockers.

“It gives us the abilities we did not have before, when memo books were left in officers’ lockers and we didn’t have access to a vast amount of information,” Chief Tasso said.

But the transition also concerns police union officials, who fear that the increased accountability of officers’ whereabouts and actions will be used to further scrutinize officers.

Officers’ entries are logged with the time and location information provided by the officer, and the department will have real-time access to those entries.

“We’re already subjected to more oversight, more bureaucratic burdens and more workplace surveillance than any other job in the public or private sectors,” said Patrick J. Lynch, president of the Police Benevolent Association, a police union.

But the memo book has remained standard-issue gear. The format of the books, also known as activity logs, has not changed in decades. They have been turned out at a rate of 10,000 per month in the department’s printing section, in Police Headquarters.

Every few months, officers are issued a fresh log to insert into their binders, which they typically carry in a pants pocket. They are reviewed and signed — or “scratched” — by supervisors during patrol tours, to monitor the officers’ activity.

Soon, supervisors will do this with a finger swipe on an officer’s phone screen. They will also be able to monitor officers’ entries remotely.

For perspective, most officers will finish their careers without ever firing their guns. But the memo book is used constantly for entries on a range of subjects, from traffic-ticket details to testimony that can affect the outcome of a major criminal case.

The content — meal times, police car mileage, patrol assignments and 911 responses — can help get an officer commended, or disciplined.

“We live and die by these books by virtue of what we write in them,” said Officer Shaun McGill, 47, who is assigned to the First Precinct in TriBeCa. His memo book from being the first officer to arrive at the World Trade Center during the terrorist attacks on Sept. 11, 2001, has become a keepsake.

Department officials say that digitizing the logs will streamline the log-entry process and relieve officers of carrying the bulky books, and also reduce paper waste.

“It’s not just going from paper to a digital app — it’s changing the culture,” said Chief Tasso, who called the change part of a technological expansion of the department’s policing method for crime-fighting, not for surveilling officers.

Since the department began issuing smartphones in 2015, some 37,000 iPhones are now in use, he said, adding that the phones give officers the ability do quick searches themselves of department databases, instead of waiting for busy radio dispatchers to relay information.

The app, which the department developed and tested with input from its officers, has fields for officers to enter details about their patrol shifts, their police vehicles, 911 responses and other information, including photos.

The standardized format will allow the department to collect “clean data,” Chief Tasso said, instead of sifting through handwritten entries in log books that varied widely depending on an individual officer’s note-taking preference.

Since 911 calls are already routed to officers’ phones, the dispatcher’s 911 information will be bundled into an officer’s digital log entry for that call, the chief said.

Frank Serpico, the former police detective who helped expose corruption decades ago, called memo books ineffective monitors of officers because “no cop is going to put anything in his memo book to incriminate himself.”

But the new system, Mr. Serpico said, could prevent old abuses, like officers leaving open space in their books to allow them to add entries retroactively.

“Guys used to leave blank pages so they could go back and add observations just to get a judge to give them a search warrant on someone,” he recalled in a phone interview.

Many major departments across the country do not use log books, and many already require officers to log 911 call response on patrol car laptops.

Still, some officers bemoaned the loss of official handwritten logs, which many officers regarded as professional journals that after retirement remained as touchstones to their careers.

“There’s a lot of nostalgia to keeping these logs,” said Officer Michael Ignatz, a 14-year veteran at the 90th Precinct. “I’m a pen and paper guy, so it’s a big change. For the younger guys, it’s an easier transition.”

Sometimes the books intersected with an officer’s personal life, such as when William Olmeda met his wife, Sandra, while he patrolled Far Rockaway, Queens, in the 1980s. He made sure to write her number in his memo book.

“I knew I had met someone special and since the memo book has such a great level of importance in memorializing your actions, it was something I wouldn’t lose,” said Mr. Olmeda, now retired. “We’ve been married 30 years, and I still have it.”

For Officer McGill, his memo book entry for his ground zero response in 2001 helped him qualify for medical treatment for Sept. 11 survivors.

His entries early on that Tuesday morning were mundane: He grabbed a patrol car with half a tank of gas and 18,701 miles on it to patrol Sector EFG, a stretch of blocks that included the World Trade Center.

Officer McGill lost most of his gear that morning, including his uniform shirt, as he rescued numerous people in the towers and escaped the collapse of the North Tower by seconds. But he struggled to save two things: his badge and his memo book, in which he made entries later while still reeling from a near-death experience.

“I knew the gravitas of that day,” he said, “and I had to finish entering it in my book.”

Atlanta United FC and Orlando City SC played to a nil-nil draw in Orlando’s first match of 2021. Josef Martinez made his first appearance in over a year for Atlanta…

New York police officers were struck with Molotov cocktails and liquid chemicals during what started as a routine traffic stop, police say. After police officers stopped a driver for running…