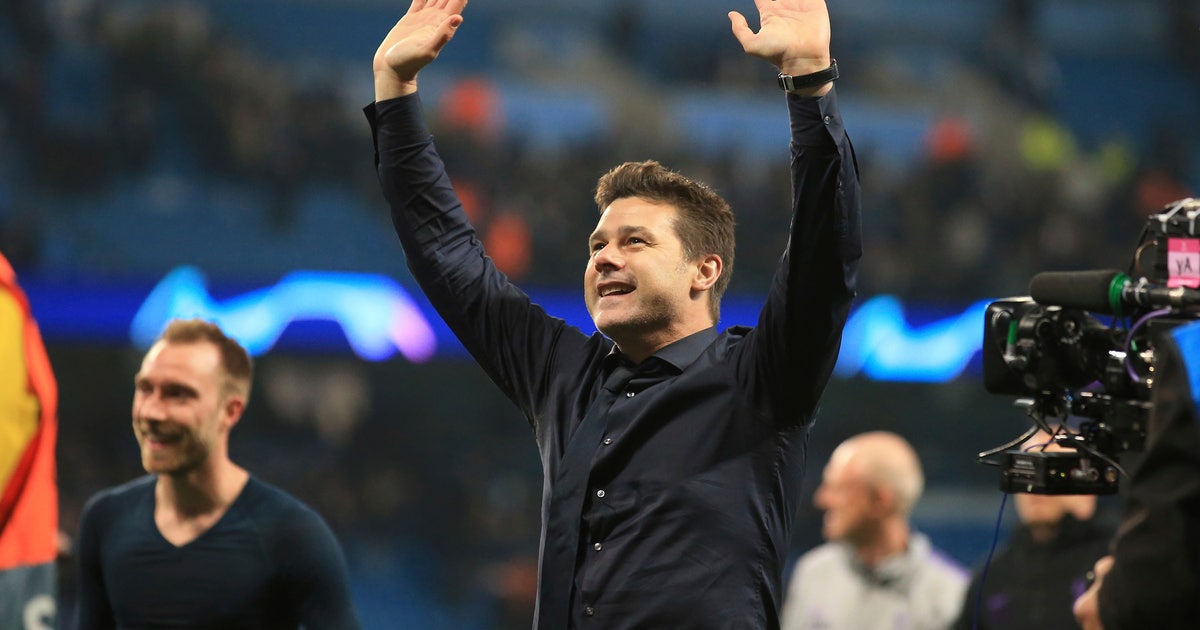 Returning to the Tottenham dressing room, with his players embracing after the wildest of games, a roaring Mauricio Pochettino turned back to the tactics board.

And pounded it with his right hand.

No game plan, no master strategy could have prepared Tottenham for what unfolded over the previous couple of hours on the field at Manchester City.

After the frenzy of fluctuating fortunes, when Tottenham and City traded in despair and delight via video reviews on a night of seven goals, Pochettino had led Tottenham into its first European Cup semifinal in 57 years.

Champions League progress had been secured at the expense of soccer’s costliest squad by a Tottenham side shorn of investment and with key players on the treatment table.

Wednesday’s 4-3 loss at Etihad Stadium carried Tottenham through on the away goals rule with a 4-4 aggregate score sealed by Son Heung-min’s first-leg goal. Thanks also to the video assistant referee who scrubbed off City’s fifth goal in stoppage time — when the home fans were already celebrating — because Sergio Agüero was offside before setting up Raheem Sterling.

“Still we don’t realize it,” Pochettino said Thursday, “because we’re like in a dream, in a bubble.”

Satisfaction indeed for the former Argentina international who has collected many plaudits but never a major trophy as a coach. Winning European club soccer’s biggest prize wouldn’t be a bad place to start for Pochettino after eliminating two-time Champions League-winning coach Pep Guardiola.

If it finds a way past Ajax over two games, Tottenham will contest a Champions League final for the first time in its history on June 1 in Madrid.

Just like Zinedine Zidane with Real Madrid in 2016, the first major trophy lifted by Pochettino could be the European Cup but with a team not accustomed to glory.

The north London club’s last silverware was 11 years ago when it won the League Cup, a competition renowned for lineups packed with fringe players.

You have to go back to 1991 to find a more meaningful success when a Tottenham side featuring Gary Lineker won the FA Cup.

There were continental successes in now defunct competitions: the 1963 European Cup Winners Cup, and UEFA Cup in 1972 and 1984.

But Tottenham has only been crowned English champions twice. And not since 1961, which gained it a place in the following season’s European Cup when the competition was the preserve of domestic champions and Tottenham made the last four.

The latest challenge by Spurs for the Premier League faltered at the turn of the year, just after this season’s midpoint. It wasn’t followed by a strengthening of the squad.

Instead the January transfer window saw Tottenham become the first Premier League side to fail to sign a player through the entire season.

“It is important when you take some decisions or cannot do what another team does, you cannot complain,” Pochettino said, reflecting on City’s vast spending.

It is the price to pay for building a $1.3 billion stadium that Tottenham only moved into last month.

It is why Tottenham traveled to City relying on Son for goals after top-scorer Harry Kane injured his left ankle again in the first leg. It is why, with Harry Winks and Eric Dier already sidelined and Mousa Dembele sold in January, out-of-favor striker Fernando Llorente had to be summoned from the bench when midfielder Moussa Sissoko was forced off in the first half on Wednesday.

“I wait for my opportunity and I knew I had to be ready because my moment could arrive,” Llorente said. “I am very happy because it is not easy when you are not playing normally. It is difficult to get the best feet.”

His hip was in form, though.

It was responsible for inelegantly nudging the ball over the line for the decisive third away goal in the 73rd minute that swung the quarterfinal back in Tottenham’s favor after surviving a VAR review. It was only the Spaniard’s 13th goal in almost 20 months at Tottenham, with six coming in domestic cup games against lower-league opposition.

With Son suspended for the first leg against Ajax, after being booked for a foul on Kevin De Bruyne, Pochettino could be relying on the 34-year-old Llorente a lot more.

“I’m still sad but I’m very positive guy,” said Son, who scored twice in the opening 11 minutes when Tottenham and City each scored twice. “I think the players can do it better probably without me.”

The modesty is misplaced given Son’s 20 goals in a season punctuated by two tournament trips with South Korea.

Son still has a valuable Champions League role for Tottenham even before the Ajax semifinal. There is still a top-four finish to secure in the Premier League to qualify for the Champions League for a fourth successive season under Pochettino. It’s no easy task with Tottenham in third place, only a point ahead of London rivals Arsenal and Chelsea, and five games to play.

Starting — where else? — but with an immediate return to City on Saturday.

“We need to be humble because beating City, no one expected that,” Pochettino said. “It can give massive belief but also if you are not clever enough to manage it in a good way, maybe you can make a mistake.”

CALEXICO, Calif. (AP) – Dr. Tien Vo’s last stop of the night is the home of a 35-year-old woman who has diabetes, asthma, rheumatoid arthritis and, now, the coronavirus. The…