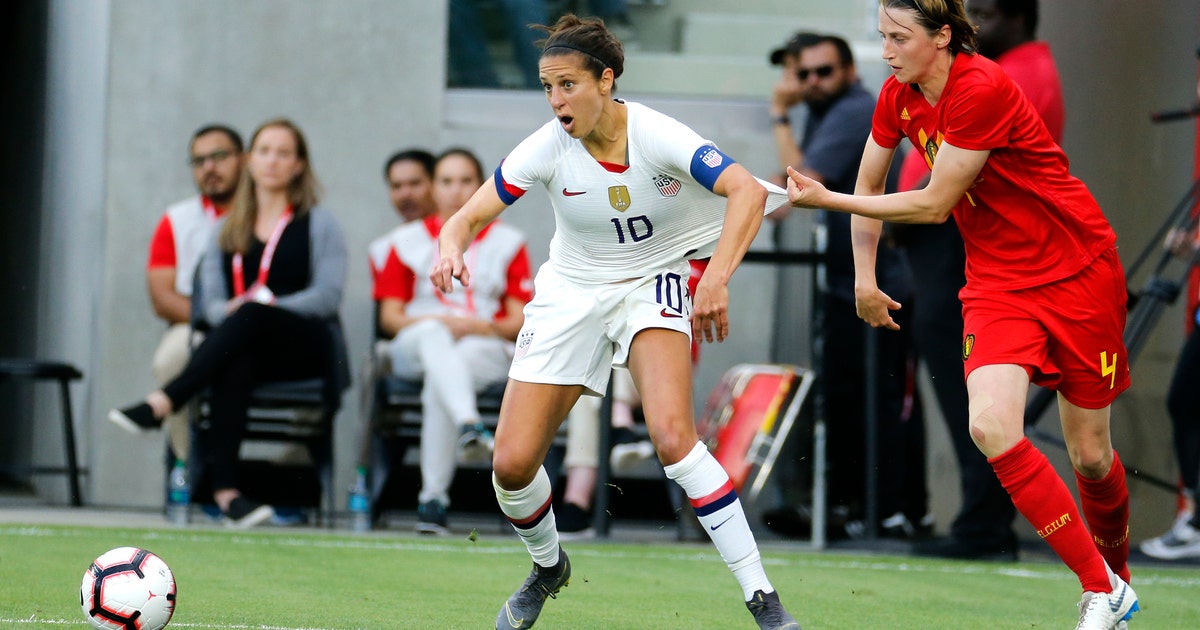 When those same fans tune in for the World Cup in France this summer, many would be shocked to find out Lloyd is now a reserve for the team she propelled to the title in 2015.

But the 36-year-old Lloyd isn’t settling for the role to which she has been largely relegated over the past two years.

Her latest performance suggested that maybe coach Jill Ellis shouldn’t settle for it, either.

“I want to win,” Lloyd said. “I’m a winner. People can say what they want, but I know at the end of the day I can help this team lift that trophy in France, and I’m not going to stop until I can do that.”

Lloyd seized the spotlight at Banc of California Stadium on Sunday night, evoking memories of her greatest performances and decisively showing she can still deliver in the U.S.’ No. 10 jersey, typically reserved for every team’s top playmaker.

In her first start of 2019, Lloyd largely had the role of a No. 9 forward against Belgium. And did she ever play it: Lloyd scored two goals in the opening minutes and added a second-half assist in a 6-0 rout.

“Tonight I got my chance, and I’m thankful for that chance, but nothing has changed,” Lloyd said. “I’m doing the same thing I’ve been doing from Day One for my career. I’m working hard. I’m humble enough to know that there’s things I can improve on, and I’m not stopping. I’ve been pretty blunt about that. Those that want to doubt can doubt.”

Lloyd famously scored her World Cup hat trick in 16 minutes, and she needed just about 5 minutes to score her brace against Belgium. Lloyd got both goals through the air, outmaneuvering defenders and knocking home both headers with aplomb.

Lloyd then set up a goal by Alex Morgan, demonstrating her playmaking ability along with her finishing skill. With hundreds of fans wearing Lloyd’s jersey in the boisterous crowd of 20,941, their hero partly stole the show from even the 1999 World Cup championship team, which was honored on the field at halftime.

Lloyd played with a few of the 99ers early in her career, and she forged her own standard in the game with back-to-back FIFA Player of the Year awards and that World Cup star turn. She became a household name and an icon of women’s sports, dabbling in everything from worldwide endorsement deals to writing her autobiography.

She was already a big-game legend before the 2015 World Cup, scoring goals to win the Olympic tournaments in 2008 and 2012 — but Lloyd insists her days of excellence are far from finished.

When asked how she stayed motivated and focused to overcome age and obstacles, Lloyd cited everyone from LeBron James and Kobe Bryant to Tom Brady and Michael Jordan.

“They’re just addicted to winning, and that’s no different than how I am as a person,” Lloyd said. “I know that I can contribute. I know what I’m capable of, and it’s just about putting the work in day in and day out, being ready for the moment, seizing the opportunity and being ready. Mentally and physically, I couldn’t have been more ready for this opportunity.”

Ellis’ decision to scale back her playing time has clearly fueled Lloyd, who previously acknowledged her disappointment with limited minutes. She had played only 34 minutes this year before Los Angeles, coming off the bench in five games.

Ellis must settle on her final World Cup roster in the next few weeks, so those decisions are taking up much of her time. When asked about Lloyd’s potential to play her way into a bigger role, Ellis gently deflected the notion, noting that Lloyd already has an important part to play in France.

“What we got is kind of what we know is Carli,” Ellis said. “I’ve said she’s a game-changer, whether she’s on the pitch or coming onto the pitch. That’s her role for us. I thought tonight, she was sharp, fantastic, played her role perfectly in terms of when she went to the 9, getting on the end of things and getting results. That’s why she’s special. That’s what I want to see from her, and she delivered tonight. I think it just speaks of our depth and our ability to have multiple players come in and be a difference-maker for us.”