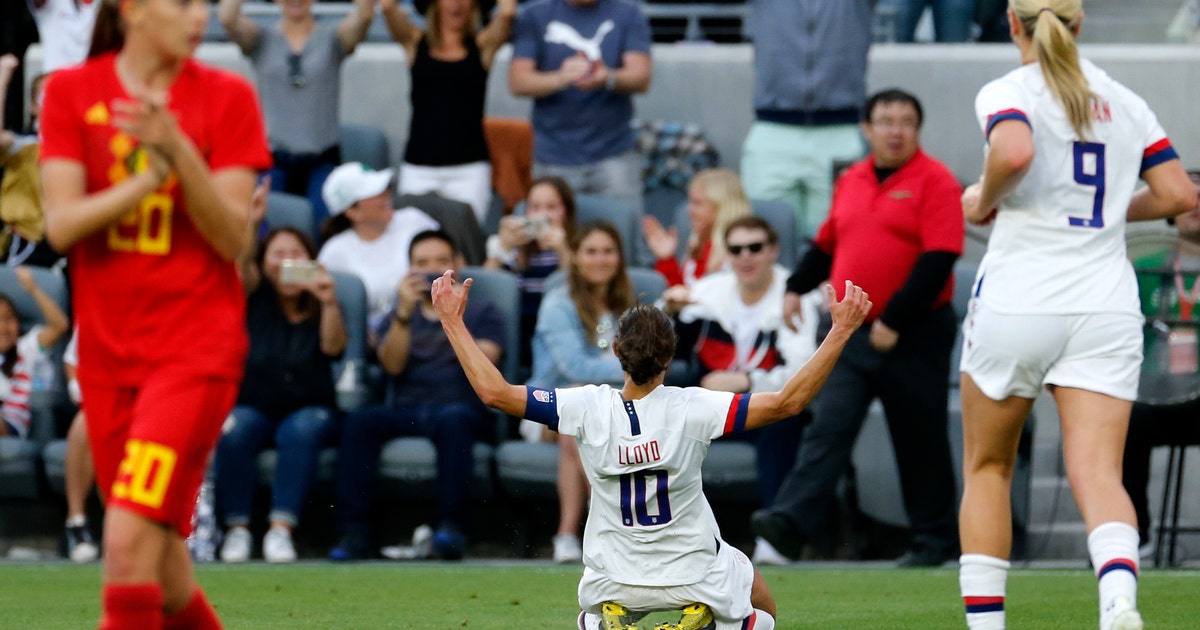 LOS ANGELES (AP) — The World Cup must be getting close, because Carli Lloyd is looking dangerous.

The 2015 World Cup star scored her first two goals of the year in the opening 19 minutes of the U.S. women’s national team’s 6-0 thrashing of Belgium in an exhibition Sunday night.

Lindsey Horan and Samantha Mewis added first-half goals on headers after Lloyd scored twice in the air. Alex Morgan also got a goal early in the second half as the Americans showcased their offensive potency in their first-ever meeting with Belgium, a well-regarded opponent that barely missed World Cup qualification.

Morgan scored on a beautiful pass from the 36-year-old Lloyd, who showed she might be more than a super sub at the World Cup this summer.

In Lloyd’s first start of the year, the goal-scoring hero of the Americans’ World Cup triumph in Canada came through with her 106th and 107th career goals, tying Michelle Akers for fourth on the U.S. career goals list.

The team’s leading active goal-scorer had played only 34 minutes as a substitute in five games this year, and she has been expected to play a reserve role in France this summer after coach Jill Ellis largely relegated her to the bench late last year. But Lloyd capitalized on her start with another dynamic display of the offensive talent that made her FIFA’s World Player of the Year in 2015 and 2016.

Veteran defender Ali Krieger also made her first appearance for the U.S. in exactly two years, getting back into Ellis’ lineup for her 99th career appearance after going 18 months without a call-up before this two-game set of exhibition victories. The Americans scored 11 goals while beating Australia and Belgium — and after giving up three goals to the Australians in Colorado, they kept a clean sheet in Los Angeles.

The U.S. team’s first game at 1-year-old Banc of California Stadium just south of downtown LA drew a near-sellout crowd of 20,941 to a friendly match that felt like a celebration of the sport.

The team debuted its World Cup white uniforms in front of a crowd including Natalie Portman, Jessica Chastain, Jennifer Garner, Uzo Aduba and Eva Longoria. The actors all took the field before the game wearing jerseys of players from the 1999 World Cup-winning U.S. team, which was honored on the field at halftime for its landmark championship-winning victory a few miles away at the Rose Bowl.

Belgium was on a 10-match unbeaten streak despite narrowly failing to qualify for the World Cup. Its roster is stacked with talent playing professionally across Europe, but the Americans were superior on both ends.

Horan then scored in the 26th minute off a corner, showcasing the Americans’ superiority in the air. Mewis also scored on a header seven minutes later, directing a free kick from Christen Press.

After coming on as a halftime substitution, Morgan got the Americans’ fifth goal in the 52nd minute. The native of the far-flung LA suburbs punched home her 101st career goal from a difficult angle after a pretty give-and-go with Lloyd.