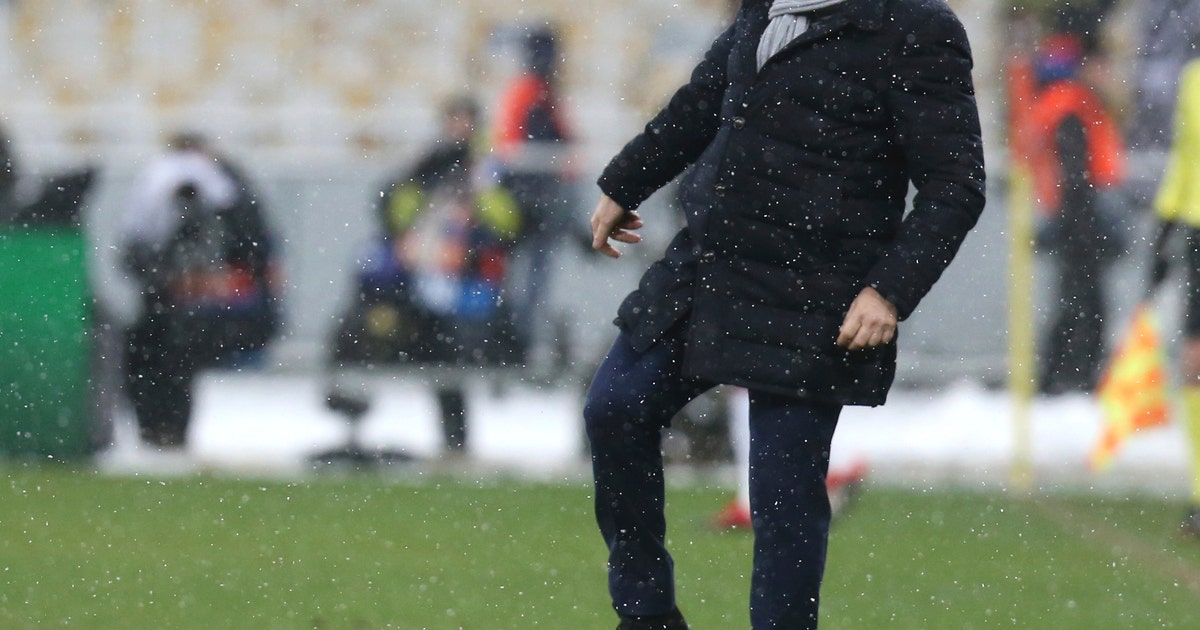 PARIS (AP) — Bruno Genesio held all the cards in his hands but has significantly misplayed them.

Despite a season marred by ups and downs and the hostility of many fans, the Lyon coach had reportedly reached a deal with president Jean-Michel Aulas on a two-year contract extension.

Instead, Lyon lost 3-2 to Rennes at home in a French Cup semifinal on Tuesday, and Aulas, who sat next to Genesio during the postgame press conference, said he had changed his mind.

“The original plan was to look at the contract extension at the end of the season, but Bruno didn’t want to wait,” Aulas said. “Which makes sense, because when you’re the coach of a big club like (Lyon), stopping leaves a big gap in your life.

“I respected this request, so I convened my management committee to find a solution. That solution was linked to results that seemed to me to be very reasonable: reaching the French Cup final and qualifying for the Champions League. The first element is no longer valid, so we decided to wait until the end of the season.”

Lyon won last week to stay in contention for a second-place league finish, which would lead to a Champions League return, but Genesio’s future at the club where he once played and was an assistant to former coach Hubert Fournier is now uncertain.

Genesio, 52, was appointed in December 2015, and his tenure has been marked by inconsistent performances. Lyon defeated Manchester City and PSG this season and showed a true will to play enthralling, attacking football, but it also has experienced huge disappointments, including a 4-1 defeat to Ajax in the first leg of a 2017 Europa League semifinal it could not overcome.

Despite 71 wins, 24 draws and 29 losses in 124 league games, Genesio’s time has taken a toll on fans. They have expressed their discontent with hostile chants and banners throughout the season, and Saturday’s match against Dijon, only days after the French Cup exit, should be more of the same.

“There are eight league matches left,” Genesio said. “I will give everything to lift the side to a second-place finish and leave the club where I found it: in the Champions League. For me, that’s the most important thing. My personal case is not the priority.”

The main problem for Genesio is that Aulas, an astute businessman who led Lyon from the second division to seven league titles and has long supported the coach, could be fed up, too.

“Extending Bruno Genesio’s contract has not been removed as an option, but it will now be linked even more closely to match results,” Aulas said. “It’s a very different plan from the one we had devised and I’m pretty upset about that.”

Asked about potential successors amid rumors that Jose Mourinho could be interested in taking a job in the French league, Aulas told L’Equipe newspaper the former Manchester United coach is “not compatible with our economy.”

Aulas did not rule out hiring a foreigner, but does have some preferred characteristics in mind.

“Well, if he has already played for Lyon, if he speaks French and if I know him personally, we are limiting risks,” Aulas said.

Broadway’s Nick Cordero has died at the age of 41 after a months-long battle with the coronavirus. The wife of the Rock of Ages star shared the news on Sunday…

Brendan Smialowski / AFP via Getty Images President Donald Trump‘s political career has prominently featured his habit of assigning disparaging nicknames to his opponents and critics, and the monikers he…