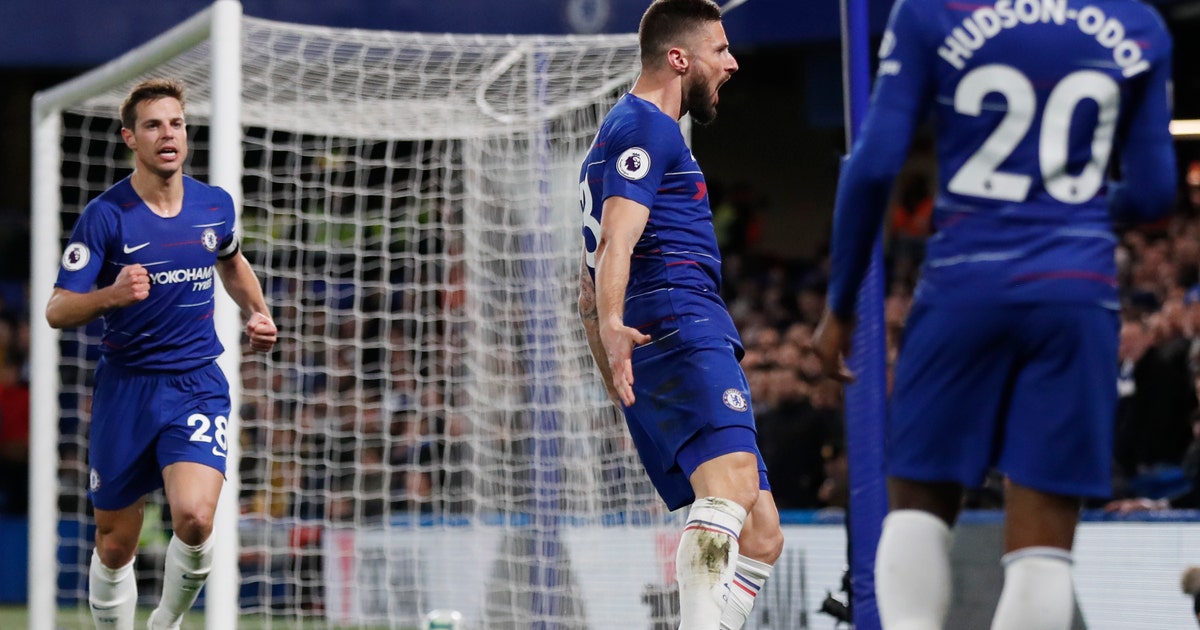 LONDON (AP) — Callum Hudson-Odoi marked his first Premier League start for Chelsea with an assist and a sparkling display in a 3-0 win over Brighton on Wednesday.

The 18-year-old winger, who made his first England start last week, set up the opening goal for Olivier Giroud, before Eden Hazard and Ruben Loftus-Cheek scored almost replica goals in the second half.

Chelsea climbed to fifth and only trails fourth-place Arsenal on goal difference in the tight race for a Champions League qualification place, awarded to the teams who finish in the top four.

Chelsea’s convincing win might now convince manager Maurizio Sarri to let homegrown talents Hudson-Odoi and Loftus-Cheek loose in the bid for both a top-four finish in the league and the Europa League title. Chelsea is through to the quarterfinals of the European competition.

Sarri has defended the fact that Hudson-Odoi made his full England debut before his first Premier League start, with the forward impressing against Montenegro on international duty. But even the Italian knew that elusive league start had to come soon for a talent so highly rated that the Chelsea hierarchy wants to build the team’s future around him.

Hudson-Odoi wasted little time proving his class on the night in an industrious showing that yielded an assist and plenty of glimpses of his huge potential.

“The manager told me to go and express myself,” Hudson-Odoi said. “I feel comfortable. Hopefully I did well.”

While Chelsea was lucky to snatch a 2-1 win at Cardiff at the weekend, there was no fortune in this clinical victory against a Brighton side that maybe had one eye on its FA Cup semifinal against Manchester City on Saturday.

Chelsea needed time to break down Brighton’s double-banked defensive set-up. N’Golo Kante saw a penalty shout rightly rejected after going to ground under little pressure from Gaetan Bong, but then Hudson-Odoi took control of the game.

Hazard’s backheel created the space and Hudson-Odoi whipped in an inviting low cross, only for Giroud to see his effort rebuffed. Then Hudson-Odoi sent in another right-wing cross, with captain Cesar Azpilicueta unable to hit the target.

Hudson-Odoi popped up again on the right, turning Anthony Knockaert inside out before drilling a low near-post cross that Giroud converted with a deft flick.

“He’s got huge potential,” Giroud said of Hudson-Odoi. “I’m sure he will become a top, top player. He needs to play in more games but it’s coming.”

The young winger might even have scored himself before the break, but his excitement got the better of him. Hazard’s lofted ball into the box evaded Kante and dropped teasingly on the inside right, with Hudson-Odoi racing in at pace — only to end up crumpled in a heap after kicking the air.

Chelsea continued its dominance after the break, with Hazard collecting a short pass from Loftus-Cheek and cutting inside Lewis Dunk before whipping home a finish from 18 yards.

The roles were reversed for the third goal, with Loftus-Cheek delivering a similar finish from almost the same spot as Hazard.

Left winger Solly March went off injured for Brighton in the first half in a blow ahead of the FA Cup semifinals.

“Our thoughts are on the FA Cup tie on Saturday,” Brighton manager Chris Hughton said. “Very quickly after that it’s about doing enough to stay in the division.”

WASHINGTON (AP) – The Latest on Tuesday’s elections (all times local): Read more… Please follow and like us: