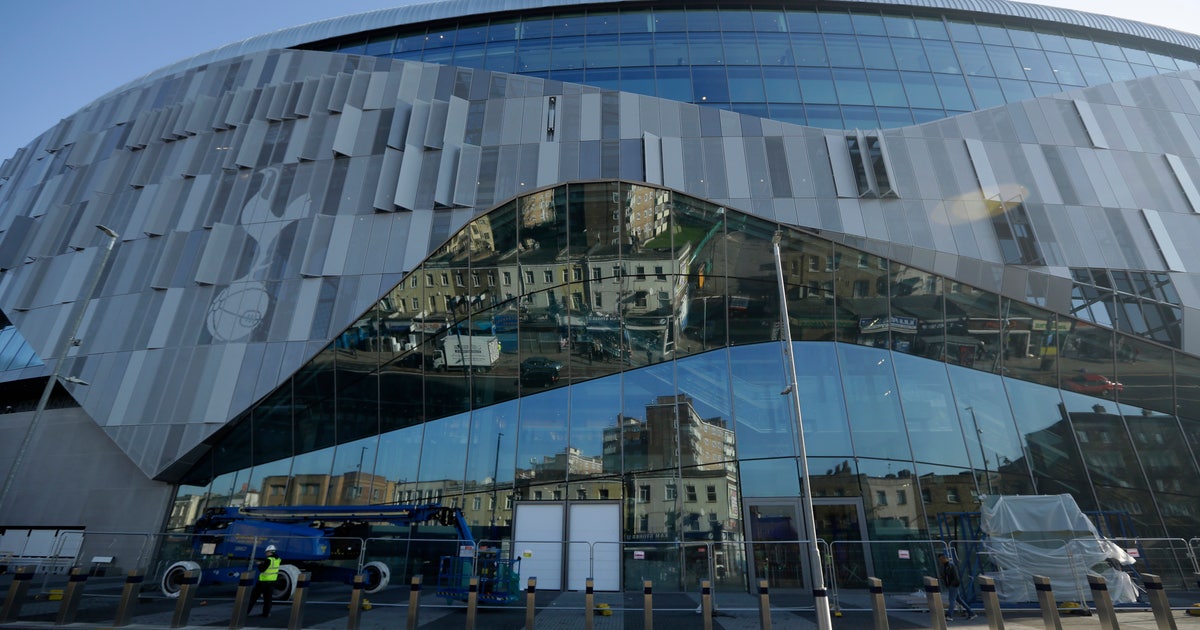 NEW YORK (AP) — Years before Tottenham Hotspur Stadium started rising like a spaceship in north London, planning on how to finance the structure was underway nearly 3,500 miles away.

In a glass tower near the World Trade Center in lower Manhattan, Greg Carey and his team at Goldman Sachs worked with Tottenham to finance $828 million (637 million pounds) of the project, which is expected to cost well over $1 billion. Club owners hope it will pay for itself and produce enough cash to help Spurs buy superstars so the club can compete at the top level of European soccer. That means more than selling the 62,062 seats for English Premier League matches.

Club officials and the banks backing them say millions more will come in from hospitality, broadcast, sponsorship, merchandising, concessions, advertising and digital rights — the types of revenue that bankrolled America’s stadium boom over the past decade.

Even at soccer’s highest level, you must spend money to make money.

“Before starting the financing we had discussed project finance with Greg and walked through a number of models and ways to securitize revenues and best approaches,” said Matthew Collecott, Tottenham’s operations and finance director. “Was useful to understand what the market was doing in terms of available methods of finance, stripping out revenue streams to securitize, mix of offerings and modeling.”

Goldman has worked to finance more than three dozen sports projects, and Tottenham’s is among the most prominent. The stadium opens Wednesday with a Premier League match against Crystal Palace. The opening was postponed seven times, a delay of nearly eight months that caused 14 of this season’s 19 league home matches to be moved to Wembley, the home of England’s national team,

Spurs played from 1899 through May 2017 at White Hart Lane, which had a capacity of 36,310 before a corner was torn down ahead of its final season to allow work to start. The new stadium’s 120,000-square meter (143,000-square yard) footprint is four times the size of the old. Features include a single-bank 17,500-seat south stand, Britain’s largest, which sits above a plaque marking the center circle of the old field. The stadium is topped by the club’s symbol, a 15-foot (4.6 meter) Golden Cockerel , twice the height of the original.

Tottenham is in the relatively poor Borough of Haringey, the site of rioting in 2011. the stadium is part of a redevelopment project that includes 222 homes designed as affordable housing and a new school.

White Hart Lane had claustrophobic corridors, cramped seats and concession choices limited mostly to fish and chips, beer and water. The new stadium, designed by Populous, usually will open two hours before kickoff (three hours for luxury seating) and is the first in British soccer with the myriad of food offerings common in U.S. venues, 60 food and drink outlets, all with cashless payments, that include a Beavertown microbrewery. Spurs established several new “largests” for a European stadium: a 65-meter (71-yard) bar along the goal line, two of the four video boards and a 23,000-square foot retail store.

Tottenham has a deal to host two NFL games each season, and the grass field on 99 steel trays retracts below the south stand on 2,090 rails to reveal artificial turf underneath.

“It’s this escalation for Champions League,” said Carey, a Goldman managing director. “It all comes down to how much money you have to buy, and these stadiums are going to not only pay for the investment in that stadium but produce excess cash flow which is going to go back into buying players.”

Tottenham reached a 200 million pound financing agreement in December 2015 with Bank of America Merrill Lynch, Goldman Sachs and HSBC, replaced it in May 2017 for 400 million pounds and said last October the amount had increased to 637 million pounds (currently $828 million) with an April 2022 expiration. Spurs, plans to convert the debt into notes with a mix of maturities.

Spurs have not signed any transfers this season, but club executive chairman Daniel Levy told the Tottenham Hotspur Supporters’ Trust on March 12 “the net spend on players would not be affected” by stadium costs.

Tottenham hasn’t won the English title since 1961 but finished among the top three in each of the last three seasons. The team is third this year, and plays Manchester City in the Champions League quarterfinals next week.

Arsenal moved in the 2006-07 season from 38,419-seat Highbury to 60,260-seat Emirates Stadium, but the new venue has not translated into a league or European championship.

“An old stadium with limited facilities built over decades had to be replaced with what we have delivered to ensure the long-term growth of the club and for future generations of fans,” Collecott said.

Spurs felt the new venue — a naming-rights agreement has not yet been reached — was key to future success. But they have kept the fans close to the field, unlike at some of the newer stadiums. The distance between the stands and the touchline is 4.9 meters (5½ yards) behind the goals, down from 13.5 meters (14¾ yards) at Emirates and 18 meters (19½ yards) at Olympic Stadium, where West Ham moved for the 2016-17 season.

Carey’s group is working on contemplated stadiums for Roma, Inter Milan and the Dutch club Feyenoord. He advises the Oakland Athletics and Tampa Bay Rays, the two Major League Baseball teams most in need of new stadiums.

“They know how to be creative using you know different resources available,” said Melanie Lenz, the Rays’ chief development officer. “A trusted adviser to help us understand what options could be available within the Tampa Bay market.”

Carey views the structure as similar to financing a road or a port.

“There’s three risks you have: construction risk, completion risk and revenue risk,” he said. “What we help the clubs do is eliminate those first two, how we can make sure we’re going to get this thing built on time and at cost, and then we invest, we give them money or we get investors for that revenue risk. And if you take a look at the revenue projections of new stadiums or renovated stadiums, you don’t miss by much.”

BERLIN (AP) – German automaker Daimler said Friday it plans to start talks on selling its plant in Hambach, France, where it has made the Smart compact car for years.…