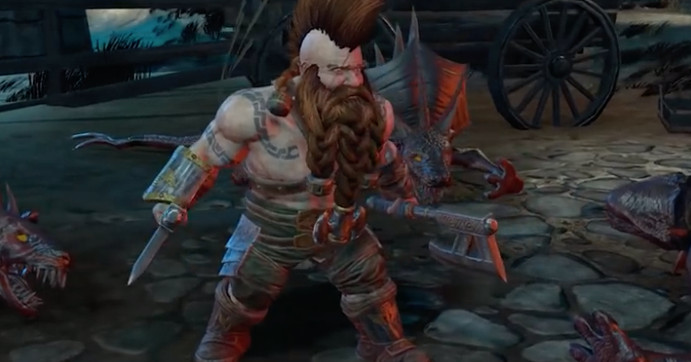 Quick grammar stipulation: In regards to Warhammer: Chaosbane’s Dwarf Slayer, “slayer” modifies “dwarf,” not the other way around. Because it’d be the definition of punching down (heh) if there was a class devoted to killing off every last Gimli.

According to the Warhammer lore here, dwarves take a slayer’s oath to die in combat against a formidable adversary. Something tells me a hack-n-slash dungeon crawler video game will satisfy that requirement immeasurably. But it all sounds like a dwarven catch-22 to me: If you want to be a slayer, you have to die in combat; only those who survive that battle become slayers. I dunno, man, just go with it.

Bragi Axebiter is the slayer dwarf for Warhammer: Chaosbane. He sounds like Groundskeeper Willy. His main method of dealing damage is a spinning axe attack. He also has some limited range attack capabilities. Fight with him long enough, and he’ll Hulk out with bloodlust and kick ass galore.

We’ve already seen the human fighter (“Captain of the Empire”) and high elf mage, that leaves the wood elf, who will likely be your prototypical sylvan ranger, if the Gauntlet-like division of labor here bears out. Warhammer: Chaosbane is being developed by Warhammer creator Games Workshop and recently got a June 4 launch date for PlayStation 4, Windows PC and Xbox One. Two closed betas will be held in March and April.

HARRISBURG, Pa. (AP) – Pennsylvania will undertake a primary election Tuesday amid civil unrest, a pandemic, the introduction of new voting machines in some counties and the debut of mail-in…