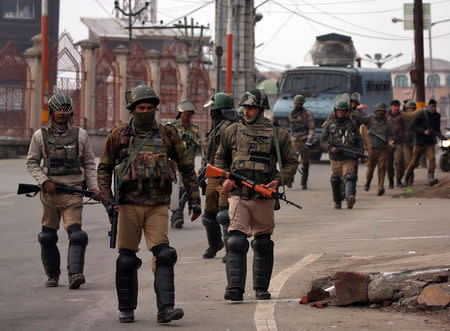 By Fayaz Bukhari and Alasdair Pal

SRINAGAR/NEW DELHI (Reuters) – More than 100 separatists in Kashmir were detained in overnight raids, police officials said on Saturday, as part of a crackdown on groups that might cause trouble ahead of nationwide elections set to be held by May.

The move comes days after a suicide car bombing killed at least 40 Indian security personnel on Feb. 14. The Indian government has said it will use everything in its power to avenge the attack claimed by Pakistan-based Jaish-e-Mohammed.

A senior police official said the arrest of leaders and deployment of troops was a security measure ahead of the elections.

“Anti-election campaigns will not be allowed and separatists will be detained to ensure free, fair and transparent elections in the state,” the official said.

On Saturday there were increasing signs that the military clampdown in Indian-controlled Kashmir and the government’s threats against Pakistan were prompting panic buying of fuel, medicines and food.

There were queues outside petrol pumps and grocery stores were packed with people stockpiling food.

Mohammad Amin Rather, owner of A-Z grocery Store in the Rajagh area of Srinagar, said: “People are buying rice, edible oil, pulses, eggs and other essentials in bulk. We are busy and supplies are running out.”

A government directive to hospitals to ensure they have stores of drugs triggered some of the concerns.

“People in the valley, especially the cities and towns, are taking everything said or done as a sign that some big trouble is just around the corner,” said Omar Abdullah, a former chief minister of Jammu & Kashmir.

Kashmir is likely to be a key issue in the Indian general election. It has taken some of the attention away from concerns about the way Prime Minister Narendra Modi and his Bharatiya Janata Party have managed the economy, and issues such as weak farm incomes and poor jobs growth.

Modi has promised a strong response to the attack and on Saturday reiterated his intention to make the perpetrators pay a heavy price.

However, he did condemn the harassment of Kashmiris that has occurred in various parts of India since the attack.

“Our fight is for Kashmir, not against Kashmiris,” he told a rally of supporters. “Kashmiris have suffered the most due to terrorism, and the rest of the country must stand in their support”.

Last week’s attack has raised tensions between nuclear-armed neighbors India and Pakistan, that both claim Kashmir in full but rule it in part. India blames Pakistan for harboring militant groups operating in Kashmir, which Pakistan denies.

Following the attack, India removed trade privileges offered to Pakistan, and is preparing to send as many as 10,000 additional troops to the contested area, according to a letter from the home ministry seen by Reuters.

“India will exercise all instruments at its command, whether it is diplomatic or otherwise,” Finance Minister Arun Jaitley said late on Friday. “This isn’t a one-week battle. It’s to be undertaken in various forms.”

On Friday, U.S. President Donald Trump said India “is looking at something very strong” in response to the attacks.

“Right now between Pakistan and India, there is a very, very bad situation. A very dangerous situation,” he told reporters.

Islamabad in turn has warned it would respond with “full force” if attacked.

The overnight arrests in the state included those of senior members of Jamaat-e-Islami (JeI), an Islamic organization that wants Kashmir to be independent from India.

The arrests led to violent scenes in parts of Kashmir, with stone-throwing protestors met by police firing tear gas.

JeI’s leader, Abdul Hamid Fayaz, and Yasin Malik, the head of Jammu Kashmir Liberation Front (JKLF) that wants independence from both India and Pakistan, were among those detained.

A spokesman for India’s home ministry did not respond to a request for comment on the arrests or troop deployments.

Next week India’s Supreme Court is expected to hear a petition attempting to remove an article in the constitution that prevents non-residents from moving to Jammu and Kashmir, the Indian state that contains Muslim-majority Kashmir. If passed it could further escalate tensions in the region.

A spokesman for JeI said the arrests of its members were a “well designed ploy” ahead of the ruling.

(Reporting by Fayaz Bukhari in Srinagar and Alasdair Pal in New Delhi; Editing by Martin Howell and Robin Pomeroy)