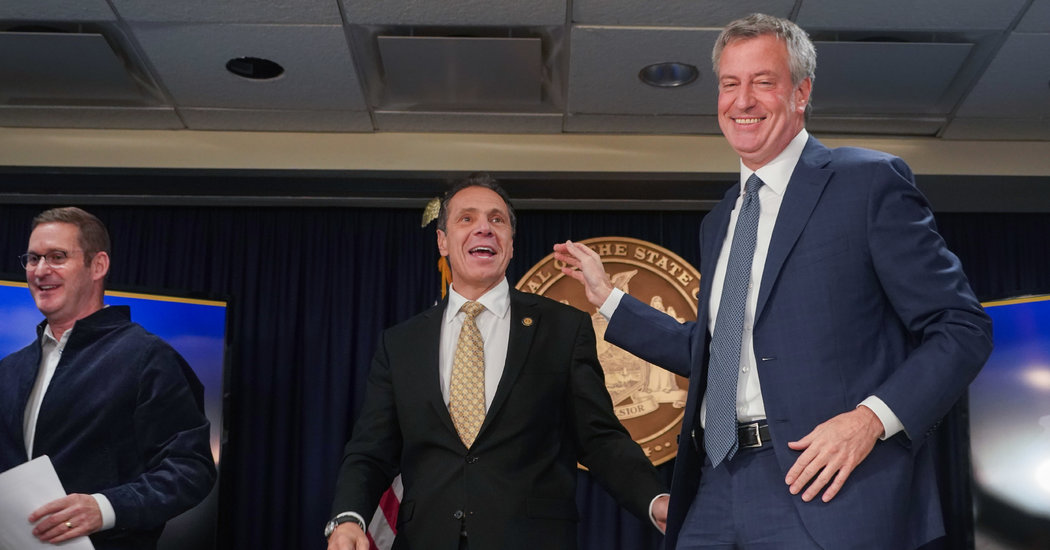 [What you need to know to start the day: Get New York Today in your inbox.]

Ever since Amazon decided to withdraw its plans to build a corporate campus in New York City, Mayor Bill de Blasio has been in attack mode.

He criticized Amazon for abandoning New York, characterizing its decision as an example of “the 1 percent dictating to everyone else.” He ridiculed the company for not having the patience to work through community opposition, suggesting on NBC’s “Meet the Press” that it showed the maturity of someone who “took their ball and went home.”

The comments represented an abrupt shift for the mayor, who had helped entice the company to come to Queens, and had recently met in Albany with Gov. Andrew M. Cuomo to strategize how they might help push aside the political hurdles that stood in the company’s way.

Three days after that meeting, Mr. de Blasio got the phone call from an Amazon executive, informing him of the company’s decision.

Within minutes of hanging up the telephone with the Amazon executive, Jay Carney, Mr. de Blasio decided to turn against the company; he said that he and his aides “immediately reached a broad and fast consensus that this was outrageous.”

For Mr. de Blasio, the aggressive posture toward Amazon, a company that has been criticized by the left for its opposition toward unions and its cooperation with federal law enforcement officials, may be a calculated political risk worth taking.

He has suggested that he is considering running for president in 2020, and taking a highly visible stand against a big corporation and its phenomenally wealthy chief executive, Jeff Bezos, could score points with the energized Democratic activists on the left who are likely to vote in primaries.

It gives him a platform to discuss corporate behavior and income inequality, one of his core progressive issues. It provides an avenue for Mr. de Blasio to position himself on the campaign trail as a mayor who stood up to Amazon — even if he once stood alongside them.

And it allowed Mr. de Blasio an opening to regain some of the ground he had ceded with his party’s left wing, many of whose leaders in New York, including Representative Alexandria Ocasio-Cortez, opposed the Amazon deal.

How well it will work for him remains an open question.

“It seems that he’s a little bit torn on who he wants to be,” said Jose Cabrera of the Queens branch of the Democratic Socialists of America, a political group that organized against Amazon, including door-to-door efforts to rally opposition.

Mr. Cabrera said the mayor’s office did not reach out to D.S.A. members or other local activist groups that gained experience and contacts during the campaign for Ms. Ocasio-Cortez. As for the mayor’s rhetoric now, Mr. Cabrera said it rang hollow. “I don’t think he has much to do at this point,” he added.

The mayor was more receptive to concerns raised by prominent union opponents of the deal.

The mayor spoke several times with Stuart Appelbaum, the president of the Retail, Wholesale and Department Store Union, who was one of the more vocal opponents of Amazon coming to Queens. The two held a meeting at Gracie Mansion in late January, and spoke again on Super Bowl Sunday, Mr. Appelbaum recalled.

“I think that we were able to inform him of Amazon’s behavior in the workplace, and the mistreatment of its workers all over the world,” Mr. Appelbaum said.

“I think he made a mistake in the way the deal was put together, I think he was wrong in believing that Amazon would behave rationally in this process.”

The union leader said he believed the mayor “changed over time,” eventually agreeing that the city “needed to find a way to deal with these labor issues.”

Mr. de Blasio disputed any notion that the conversations caused him to alter his approach, which he laid out on the day last year that he announced Amazon would be coming to New York City. The city — a union town, the mayor said — would eventually change the corporate behemoth.

“When Stuart suggests evolution it misses the fact that I think I felt all that at the beginning,” Mr. de Blasio said on Wednesday.

Mr. de Blasio has said repeatedly in recent weeks that he is not ruling out a run for the White House, and his pivot on Amazon comes at a convenient time for someone who might be contemplating facing Democratic primary voters who lean leftward.

“I knew there would be some of my fellow progressives who for other reasons might not have liked the deal,” the mayor added. “But the progressive movement isn’t a monolith, certainly the Democratic Party isn’t anything like a monolith. It never surprises me when there’s differences among my friends. But I felt very comfortable that the net gain for working people was really clear, was unusually clear.”

“If I had wanted to run away I could have obviously done that,” he added, insisting he was never less than gung-ho in his support for the deal. “I believed it was a good deal, I spoke to it many many times.”

The mayor said that his switch from Amazon-booster to Amazon-basher was actually part of a consistent stance toward big business. “It’s important to understand that I’m very comfortable in my own skin,” Mr. de Blasio said. “I have been a self-identified progressive since high school and I know that in all dealing with corporate America you have to take a position of demanding guarantees for working people.”

The Amazon deal and Mr. de Blasio’s possible presidential aspirations came up at a news conference earlier this week, which also happened to fall on the day that Bernie Sanders announced that he would again seek the Democratic nomination for president.

Although Mr. de Blasio did not endorse Mr. Sanders for the Democratic nomination in 2016, he was and remains a fervent admirer. Yet when he was asked if he would campaign for Mr. Sanders this time around, his answer hinted at his own presidential intentions.

“I’ve been really, really clear; I’ll be clear again,” Mr. de Blasio said. “I do not rule out any particular path for myself.”

Through the whole process of dealing with Amazon officials, the mayor did not meet, or even speak to, the Amazon chief executive. Mr. Bezos did not visit the site in Long Island City, or come to New York at any point as part of the process.

Yet less than a week after Amazon pulled out, Mr. Bezos visited New York on Wednesday to speak before an aviation club in Midtown Manhattan. He spoke for about an hour, mostly about space travel, took no questions from the audience, and, according to two people who attended the closed-door event, never once mentioned Amazon’s failed attempt to build a campus in New York.

Then he left, ignoring questions outside from reporters.

Education groups lead in spending on lobbyists in Maryland

ANNAPOLIS, Md. (AP) – Two groups advocating for education and the Maryland Jockey Club were among the organizations that spent the most on lobbyists in Maryland in the most recent…