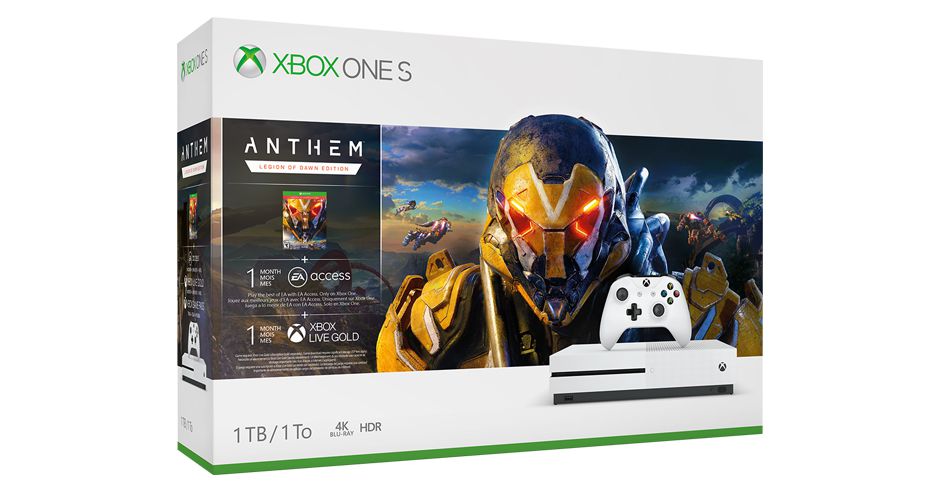 Anthem, BioWare’s highly anticipated online multiplayer game, is getting a new Xbox One bundle, Microsoft announced on Monday. The bundle, which will include Anthem: Legion of Dawn Edition, an Xbox One S console, and a one-month free trial to EA Access, will be released when the game launches on Feb. 22.

The release schedule for Anthem has been more than a bit confusing, with both VIP and open access demos, and a preview set for Feb. 15, exclusive to Origin Access Premier subscribers.

The Legion of Dawn Edition that comes with the Xbox One bundle, basically Anthem’s version of a deluxe edition, normally retails for $79.99. It includes a legendary weapon and armor packs as well as the digital soundtrack. In addition to the free trials to Xbox Live Gold and Xbox Game Pass that come with an Xbox One console purchase, the bundle will also include a free trial to EA Access, EA’s game subscription service.

Because Anthem is an online game, it will require an Xbox Live Gold subscription to play.

The Xbox One S Anthem Bundle is available for pre-order now at GameStop, though it will likely be added to other major retailers like Amazon, Best Buy, and the Xbox Store itself soon. The bundle retails for $299.99.

The Latest: Officer shot in Las Vegas amid protests

The Latest on the death in Minneapolis of George Floyd, a handcuffed black man who pleaded for air as a white police officer pressed a knee on his neck: Read…