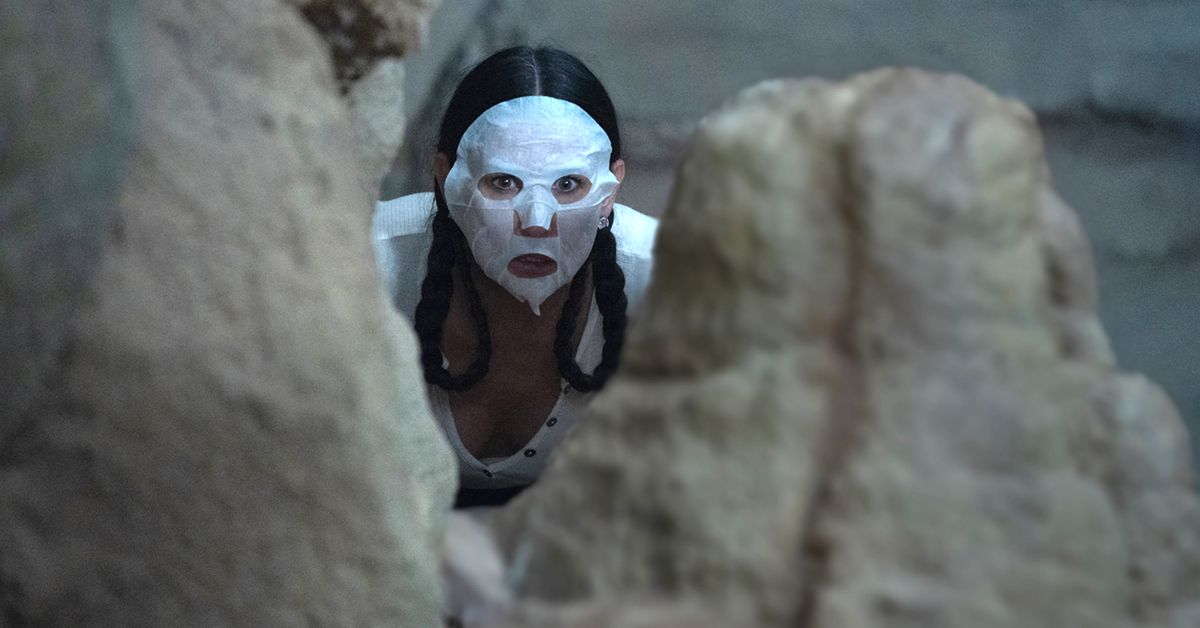 Corporate retreats never go as HR intended. Embarking on scavenger hunts or escape rooms or paintball showdowns is fun, in theory, but treating your co-workers like family by way of ruthlessly regarding them as competitors might be one of the great paradoxes of our time. Corporate Animals, a scathing satire from Creep director Patrick Brice and Peep Show writer Sam Bain, rips the farce apart.

The terror begins when Lucy (Demi Moore), the egocentric CEO of an edible cutlery company, decides to take her staff on a caving adventure in New Mexico. Not as fun as it sounds: Lucy is the kind of hellish boss that would pit her two assistants (Jessica Williams and Karan Soni) against one another by promising that they’ll both be made Vice President by the end of the trip. Their journey, and the rest of the employees dragged on the underground adventure, only goes downhill from there. Lucy deems the cave’s beginner’s trail too easy for her (inexperienced) team, so she hires an instructor, Brandon (Ed Helms), to lead them down the advanced path. The group soon finds itself trapped in a cavern with no food, no water, no escape, and the worst boss on the planet.

Speaking at a Q&A following the film’s Sundance Film Festival world premiere, Bain confessed that a desire to make the survival story funny prompted him to write Corporate Animals. That certainly makes for a novel concept, as the film takes as many cues from Alive: The Story of the Andes Survivors as it does from The Office. True survival stories (127 Hours) or fictionalized accounts (Open Water) build suspense by using the lack of food and water as a ticking clock, and then test the characters’ will to live by presenting them with impossible choices. Character almost always weigh their options, and let the clock run, before making the ultimate decision — cutting their arms, eating their friends or simply giving up.

Corporate Animals skips the agony of debate. Instead of taking their sweet time debating the ethical implications of eating the dead guy, Isiah Whitlock Jr.’s Derek jumps straight to drastic measures, reminding his colleagues that, “If you swap the letters around the word ‘team’, it spells ‘meat.’” They even consider accelerating the process by killing one of their own, all with the straightest of faces.

The dry and deadpan humor of Corporate Animals drills down from there, confronting the taboo subjects of cannibalism, murder and sexual harassment with a dark comedic voice. Eating your dead co-worker may not sound hilarious, but Brice and Bain’s film pushes you there, and makes you wonder how long you’d go before chowing down yourself.

The comedy works largely thanks to a cast who understands the balancing act of terror and absurdity. Whitlock Jr. and Calum Worthy (Bodied) are clear standouts, the latter struggling with an infected injury that ends up making him hallucinatory, resulting in a fantastic musical sequence with a truly shocking pop cameo. Karan Soni (Deadpool 2) finally gets a leading role, playing an arrogant office drone who jumps at the thought of a promotion, yet recoils over his predicament, and some sketchy abuse of power by Lucy. His character eventually accuses the boss lady of “Weinsteining,” another instance of Corporate Animals going straight for the jugular. Soni’s dead serious performance sells the joke.

Brice traps the action in a single location, but like both Creep movies and his homebound film The Overnight, he uses a contained scenario to push the characters’ buttons and get as close to their misery as possible. He finds ways to break up the action — someone eating a poisonous newt gives way to a trippy animated sequence — but Brice doesn’t have to resort to too many tricks to make the dark comedy sing.

The outlandish plot points feel right at home with the rest of the movie, a wicked, wacky survival story that’s nothing short of a miracle.

Rafael Motamayor is a freelance TV/film critic and reporter living in Norway. You can find more of his workhere, or follow him on Twitter @GeekwithanAfro.

Mexico hit new virus record of over 500 deaths per day