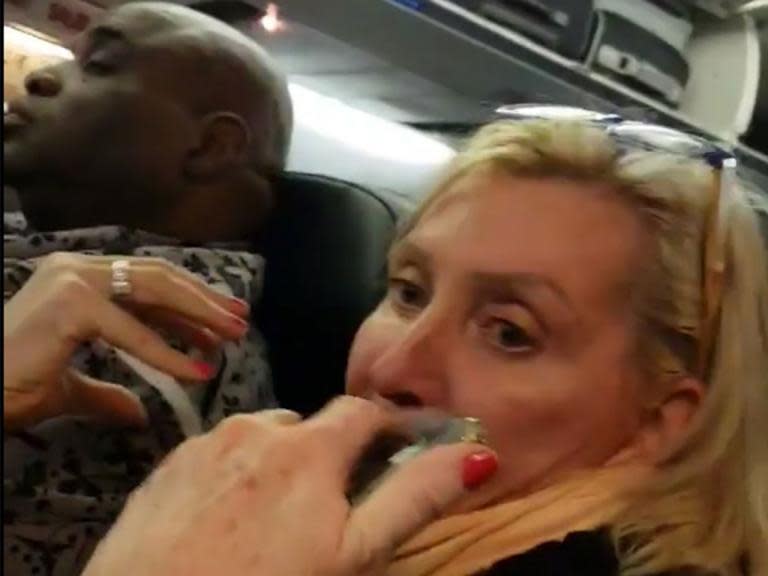 A woman was reportedly thrown off a flight after raging against “big” passengers she claimed she was wedged between in a middle seat.

The unnamed flyer was caught ranting on camera earlier this month on a flight between Las Vegas and Newark airport in New Jersey.

The outburst was filmed and later shared online by Norma Rodgers, one of the passengers on the receiving end of the woman’s insults, and has since been viewed more than one million times.

Footage of the incident shows the passenger complaining about being seated between Ms Rodgers and a man she had been travelling with, named only as Mac.

“I don’t know how I’m going to do this for the next four hours,” the woman can be heard telling someone on the phone. “This is just impossible, they’re squishing me, it’s unbelievable.”

A flight attendant arrives and is asked if the woman can move seats due to the dispute that has broken out between the passengers.

“I can’t sit here because they’re both so big left and right, I can’t even sit here,” she tells the airline worker.

The woman is asked to get out of her seat and wait at the back of the plane for another to become available.

“Thank goodness, because I eat salad, okay?” she adds as she gets out of her seat.

The comment prompted shocked gasps inside the cabin, while another passenger tells her: “You should be ashamed of yourself, what you’re doing is so terrible.”

“I’m not going to be politically correct,” she replies: “Why don’t you sit between those two big pigs?”

In a Facebook post discussing the incident, Ms Rodgers said United Airlines staff eventually escorted the woman off the plane following complaints from other customers.

“I would like to say thank you to the flight attendants, supervisor and gate agent that handled the situation professionally and calmly,” she wrote.

“Thank you for addressing the issue immediately and not letting it escalate any further.”

In a statement, the airline said the passenger had been removed from the plane and placed on another flight the next day.

“United flight attendants care about the safety and well being of all of our customers which is why they acted quickly to find a different seat for the disruptive customer,” a United spokesman said.

“When it became clear that this passenger’s behaviour was likely to be problematic on this flight, she was provided alternate travel arrangements first thing the next morning.”

Former Vice President Joseph R. Biden and the Democratic National Committee raised $141 million in June, marking the second month in a row that they have outpaced President Trump and…

Daily coronavirus cases in US top 50,000 in new record

Wednesday marked the first time in which the number of Americans diagnosed with the coronavirus surged past 50,000 in one day. According to the Washington Post, there were 52,789 cases…